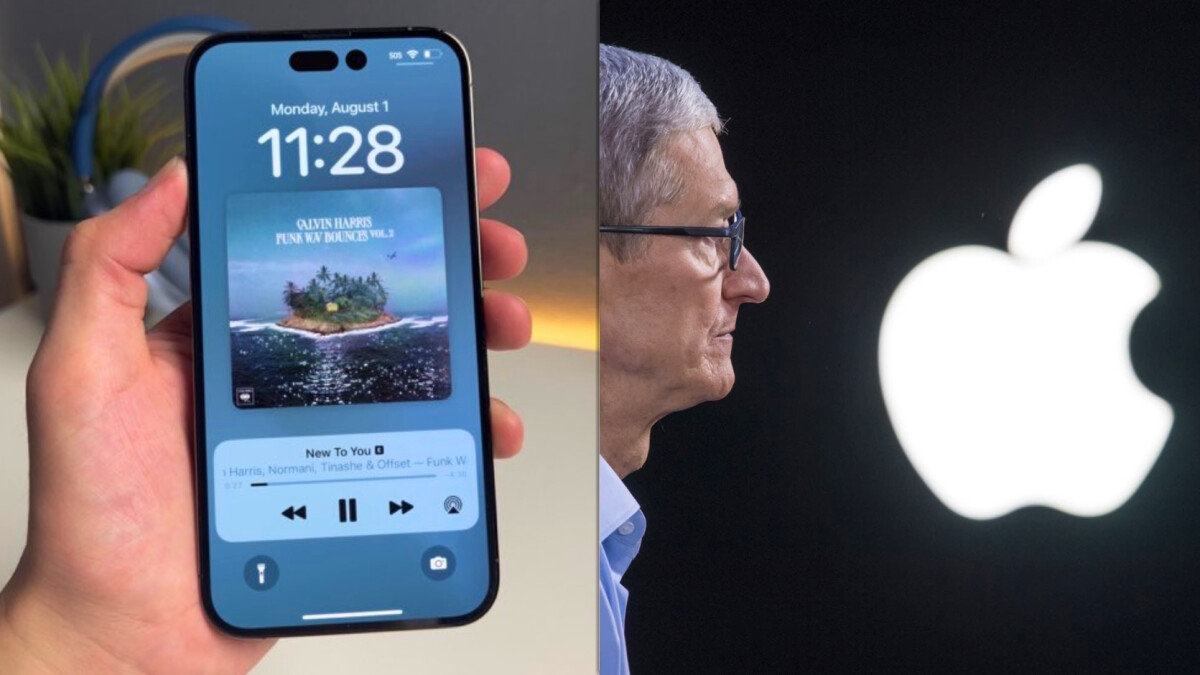 It’s true… At least on the surface, Apple isn’t a phone-maker that tries too hard.

If most Android manufacturers want to impress their existing and potential customers with flashy new designs and new features each and every year, Cupertino is playing its own game with incremental hardware upgrades and a focus on polishing existing features.We’ve talked about it a million times, but one’s surefire – both approaches come with their own set of perks and challenges. For example, some groundbreaking features that Android phones would get years ahead of the iPhone would often lack the necessary fine touches to make them work as seamlessly as they could’ve, had the manufacturers taken their time. On the other hand, Apple’s “slow innovation” approach means that some users (especially those switching from Android) might find the iPhone somewhat boring.

Back in the day, I sold my iPhone XR and then iPhone XS after just a couple of months of use to go out and buy a Huawei P30 Pro, which was so much more innovative and exciting at the time. It’s still one of my favorite phones ever.

However, this time around, the new iPhone 14 Pro and iPhone 14 Pro Max are expected to bring a set of upgrades that would make even those Android users with Galaxy S22 Ultras and Pixel 6 Pros a tiny bit jealous… Or even really jealous!

According to leaks and rumors, a notable iPhone 14 Pro and iPhone 14 Pro Max upgrade is expected to come in the area of performance. Now, this might seem quite surprising to some since, as we know, Apple’s new A16 Bionic is said to stick to the same 5nm variety used for the iPhone 12 and iPhone 13 (meaning the overall CPU and GPU bump isn’t expected to be all that big).

However, what’s expected to make a big difference this year is a new form of vapor chamber cooling technology. As you might know, over the past few years, heat dissipation systems on phones have been continuously getting more advanced.

Android phone-makers have been utilizing vapor chamber cooling for a long time now, and last year Xiaomi introduced what the company calls Loop LiquidCool. It’s a twist on traditional vapor chamber cooling, supposed to double the cooling efficiency. This technology was promised to debut in Xiaomi products in the second half of 2022, which means it might arrive with the Xiaomi 12T series (launching very soon).

Interestingly, Xiaomi’s already developed another form of liquid cooling – the vein pump cooling system (the names get creepier). This one’s based on the bionic design of leaves and debuted alongside the Xiaomi 12S Ultra, which is one of the best-performing Android phones on the market right now.

Anyway, as of now, we don’t know exactly which variety of vapor chamber cooling Apple will go with. Knowing Cupertino’s high standards, it’s possible that Tim Cook & Co might’ve developed their own heat pipes, which could set the bar for future iPhones and Android phones.

What we do know is that the lack of active cooling seriously holds back current iPhone models. To put things in perspective, the older design of the iPhone SE (2022) allows it to squeeze out a little bit more performance than the newer iPhone 13. Moreover, Apple’s older A14 Bionic chip on iPad performs noticeably better than the newer A15 Bionic does on iPhone, largely because the iPad is much bigger and has more area for more effective heat dissipation. Physics.

In more practical terms, an active cooling system should let iPhone 14 Pro users play games for longer without getting as much overheating and dropped frames due to throttling. Another area which Apple will probably be looking to improve is screen brightness under sustained loads, as in order to keep temperatures down, iPhone 13 currently dims its display brightness when it senses too much heat is starting to creep in. This can be a problem when you’re outdoors.

With the improved A16 Bionic chip and an advanced active cooling system, iPhone 14 Pro and iPhone 14 Pro Max might leave the Android competition in the dust.

As you might know, according to Geekbecnh, Apple’s A14 (2020) and A15 (2021) CPUs found in iPhone 12 and iPhone 13 are already faster than the latest and greatest from Qualcomm and Samsung. Therefore, despite not switching to a 3-4nm processing, the A16 Bionic in the iPhone 14 Pro series could take Apple’s lead to an all-time high, all thanks to the presence of active cooling.

Whether you like Apple or not, I’m sure we can all agree on one thing – iPhone is the best phone video camera, thanks to superior picture quality, HDR, and even more natural Sensor-shift OIS compared to Android. Well, this year things will only be getting better for those planning to stay or become iPhone users, which means the video quality gap that already exists between the iPhone and Android could only get wider.

iPhone 14 Pro and iPhone 14 Pro Max are expected to finally switch to a first for Apple 48MP primary camera sensor (the first megapixel jump since the 12MP camera on the 2015 iPhone 6S), which should make possible features like 8K video recording and 4K Cinematic Mode.

8K video has existed on Android phones for a while now, but it’s never been of great quality overall. Knowing Apple’s affinity and attention to great video quality, it’s almost certain that this time we’ll see 8K video done right.

While having the ability to shoot high-res 8K videos on a phone sounds nice, I still think this is more of a gimmick than a useful feature (at least as of now). What gets me truly excited, though, is the ability to record improved Cinematic Mode videos in 4K.

Cinematic Mode is one of those features that you have to try out and play with in order to develop an appreciation for it.

In its current form, Cinematic Mode is a fun feature that could trick your friends into thinking you shoot your TikToks with a “real camera”. That being said, just like the early days of Portrait Mode on the iPhone 7 Plus, Cinematic Mode often faces issues with edge detection and can only be used in 1080p.

In case you don’t know, many YouTube creators already use iPhones to shoot entire videos and run their successful channels. Therefore, the ability to shoot Cinematic Mode videos in 4K on a larger primary sensor with better low-light sensitivity and possibly (and hopefully) improved software algorithm for better edge detection would take Cinematic Mode from a fun feature all the way to a truly powerful tool for enthusiasts and even pro-level video creators.

iPhone 14 Pro Max to extend Apple’s massive lead in battery life over Android thanks to a more efficient processor and display?

iPhone 14 renders in their supposed colors. Renders by Apple Hub.

Finally, another area that Apple’s expected to continue to dominate is battery life.

In addition to that, an always-on display mode that’s now almost surefire to debut on iPhone 14 Pro should additionally help with preserving battery life for those who like to check their phone a lot. Of course, the A16 Bionic chip with more efficient cooling should only add to what’s expected to be amazing battery life on iPhone 14 Pro and especially iPhone 14 Pro Max, as in theory, it might be able to complete heavy tasks faster.

As you might know, the current iPhone 13 Pro Max broke all battery life records amongst all flagship phones that we’ve ever tested. It’s a device that can last you two days on a single charge unless you push it too hard. Therefore, the expectations for the bigger iPhone 14 Pro Max are even… higher.

How about an iPhone that lasts two days for most people? Right now, that seems more likely to become a reality than ever, but let’s see if Apple manages to pull it off…

Apple vs Apple: The biggest threat to the iPhone 14 Pro is… iPhone 13?

As the title says, Apple doesn’t usually try hard when it comes to early adoption and upgrades, but this time Android is under some pressure. Tim Cook & Co are slowly but steadily catching up with the likes of Samsung and Google, which on their end, are slowly but steadily reaching the ceiling of innovation (at least as far as slab phones are concerned). According to multiple reports, Android users are now more willing to switch to iPhone than they’ve ever been before, and that’s not a coincidence.

Android flagships have been getting increasingly more expensive in the past few years, matching and surpassing Apple’s premium iPhones. Hence, despite the fact that iPhone 14 Pro and iPhone 14 Pro Max are indeed expected to see a $100 price bump, this would still make them only as expensive or cheaper than phones like the Galaxy S22 Ultra or Xiaomi 12S Ultra (at launch). Not to mention foldable phones like the $1,800 Galaxy Z Fold 4 and $1,600 Xiaomi Mix Fold 2.

If anything, Apple’s biggest challenge on the way to selling a stupid amount of iPhone 14s won’t be any Android flagship but rather Cupertino’s own iPhone 13 models. In case Apple doesn’t decide to play the MacBook Air card (Apple recently released a new, more expensive MacBook Air and didn’t reduce the price of the previous model), the iPhone 13 is expected to stay in the lineup and go down to just $700, which could make the new iPhone 14 Pro models seem overpriced at a whopping $400-500 on top.

Anyway… Is Apple’s definition of trying hard enough to convince you to buy an iPhone 14 Pro? Or perhaps you’d be pleased to pick up an affordable iPhone 13 for less once the new models are out? Or maybe you’re waiting for the first USB-C iPhone like me?